Home » The most successful founder in history

The most successful founder in history

Who is Bill Gross?

In this episode of the Tony Robbins podcast, you’ll hear from Bill Gross – an entrepreneur who has started and exited from seven companies valued at more than $1 BILLION each. He is truly one of the greatest entrepreneurs of all time.

Bill looks for opportunities that are BIG and broken and then brainstorms technology solutions to fix them. Twenty-three years ago, he started Idealab – a company that Tony Robbins is involved with today.

During its more than two decades, Idealab has started more than 150 companies, created more than 10,000 jobs and had more than 45 successful IPOs and acquisitions. Bill Gross and his management teams have started and exited from seven valued at $1B each, and their latest venture, Energy Vault, just secured $110M Series B funding from the Softbank Vision Fund to further its aim to eliminate our dependence on fossil fuels. Energy Vault also won Fast Company’s 2019 World-Changing Ideas Awards in Energy.

Bill creates a new company idea every single day – and what’s even better is that he’s making an incredible impact on the world.

In this podcast, you’re going to hear Bill’s top 10 lessons of all time as a serial entrepreneur, his inspiration to create educational software and how to inspire your staff to work harder by sharing equity. 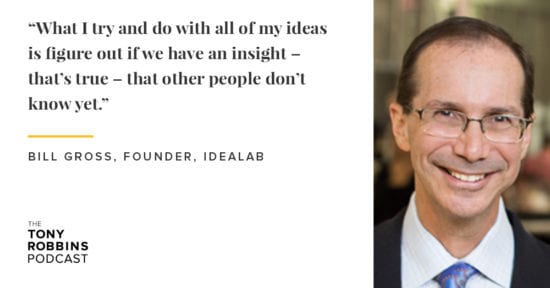 Bill isn’t shy about sharing his failures, as he’s always found a way to turn his setbacks into successes and learn valuable lessons along the way. Some of his biggest lessons include the need to find contrarian ideas that you know to be true but that no one believes yet and the realization that being too early with an idea is even worse than being too late with it. He suggests entrepreneurs who are ahead of their time do their best to conserve cash and wait it out until the marketplace and demand can catch up with their innovation.

Sharing in the upside

Bill has not gotten where he is by being an island. He learned early on in his career that you need a team of talented individuals to help you achieve success and that the best way to unlock human potential is to get your team thinking like owners. This is why he advocates giving stakes in a company to as many of the employees as possible to create an organizational culture where everyone gets to share in the upside of success.

In part one of this podcast, we heard Bill talk about his many successful companies and the lessons he’s learned from starting seven companies that eventually reached revenues of over $1 billion. In part two, Tony gets an opportunity to interview Bill on finding the truth that others do not know, his advice on raising money and what he would like to be remembered for.